The white spoon’s reign as toy of choice has been long and memorable but it would appear that it is under threat, from a wooden peg. In fact, many wooden pegs.

About a week ago the peg started showing up clutched in Milo’s hand. Usually in the left, with the spoon in the right. Since then at least one peg has joined us at meal times, bath times, most journeys we take and even some nap times.

The appeal seems to be the sheer number of them. I secrete the box of pegs somewhere in the living room so Milo doesn’t usually happen upon it until mid-morning. When his crawling and rummaging does lead him to the booty the result is always one of great enthusiasm. He uses his pincers to open the tin and release the pegs which flow out like hundreds of Agent Smiths fighting Neo in the Matrix Reloaded, right before the trilogy really starts to head downhill.

Milo chases them around the carpet, waving them at the cats, tossing them down the stairs, placing them on shelves above his eye line and then retrieving them, posting them into Elefun’s ears, scattering them all around the house. What’s left Huckleberry tends to drag down to his lair, not to be found for days.

The pegs occasionally bite him, usually on the fingers. Milo indignantly shakes his hand until the peg springs off, and then continues on his way. Given the amount of time they spend each day in his mouth it is amazing he has not yet accidentally clipped one to his tongue. If that should happen I suspect his indignation may be more acute, perhaps tipping the balance back in favour of white spoon.

Today I experimented for the first time with the game “peg echidna” which we did not invent; we have borrowed it from a friend of ours, a visionary parent named Sarah. Essentially one clips pegs to one’s child’s clothing. The child then has a terrific time finding and removing these pegs. This may not work for children of all dispositions but it certainly appealed to mine. Milo giggled and crawled around in circles locating and then removing the pegs one by one, which mostly ended up in his mouth. 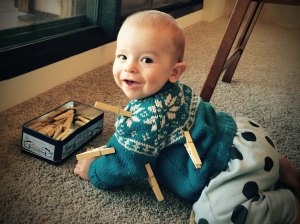 Last night, at around 3am I think we witnessed Milo’s first proper tantrum. He woke, as he often does at this time, so I went in to scoop him up and bring him into our bed. When I arrived he had his schnuller in his mouth but had somehow managed to purloin a second. He does this quite regularly and we are not sure where he gets them from; recently we moved his cot to do a little painting and uncovered a stash of four sitting peacefully in one corner underneath his mattress.

He was sucking on the two intermittently, one always held firmly in his free hand. Foolishly I prised the spare out of his hand and tossed it back into the cot. Well, what had been a reasonably content boy seconds before transformed into a frenzied, bellowing, red-faced fiend, such was the heinous nature of what I had done. In the half-light he looked a little like Kuato from Total Recall. I didn’t adapt my strategy nearly fast enough however and thought his malaise would pass quickly. It didn’t. He drank his bottle in an aggressive spiteful fashion and as soon as he was done the bellowing recommenced. Eventually I concluded that his displeasure was related to nothing more deep-seated than the theft of his second schnuller, so dashed back into his room to retrieve it for him. Milo popped it back into his mouth, lay down in the middle of our bed and promptly went to sleep, the second clutched in his little hand.

Milo and I woke up this morning bleary eyed, face-to-face at around 0645, Kuepps was on her way out the door. We started slowly; breakfasting, shooing away Myna birds, pooing. Mikhail Lomonosov’s law of mass conservation was on full display in our home today. The anti-skinnying regime is having flow-on effects, and perhaps soon I will once again have space for my extra beers in the cupboard. Each nappy change, with Milo’s current extreme wrigglyness, takes about 15 minutes, so before long it was time for a nap and we had achieved very little.

Upon Milo’s reawakening we promptly headed to a nearby cafe to meet with a nanny friend of ours to help with our grand planning for when I return to work in September. The coffee was cut short due to more nappy urgency so we headed upstairs to once more fulfill my fatherly duties. I uncovered a below average offering, no challenge whatsoever, and quickly made the arrangements.

As has been documented many times Milo is not easy to re-nappy, or to dress. As soon as he is trouserless he is off, using his forehead as a fulcrum to quickly spin and then dart away at top speed. On this occasion I was keen to debrief with Kuepps on the conversation I had just had, was confident Milo was safe trouserless for a few minutes due to the nappy activity we had just remedied, so just let him dash off. Which of course he did, straight over to the sliding door where he clambered to his feet and started talking to himself while bobbing up and down (with a peg in one hand). Less than a minute later I looked up again… and of course the worst had happened.

One’s brain moves quickly in such a scenario. Many counter-theories are formulated and discounted within milliseconds, trying to convince you that what your eyes are seeing can be explained by… something else. A trick of the light perhaps, a small ant-mound that has sprung up in the living room, a smallish round creature that has made its way in somehow, perhaps an Armadillo all coiled up? In this time I had already started moving quickly toward Milo, as the theories were debunked one by one. Milo, sensing a heightened energy in the room, sprang to life. He quickly returned to his knees from his standing position and dashed off to the right, giggling, with the trousers of his onesie billowing out behind him like a cape.

By the time I arrived significant damage had already been done. I scooped him up one-handed, attempted to stem the flow of new trouble, thought briefly about how this situation could be resolved without a shower, and then conceded defeat. We were both stripped in a jiffy and in the shower; fortunately the cats were locked up in the laundry or the scene could well have escalated out of hand. Milo did not initially enjoy the shower but reasonably soon saw the funny side of it.

Once cleansed I re-nappied Milo, plonked him in front of Elefun and began the clean up. There is something deeply humbling about cleaning poo off the carpet in the nude.

After this excitement we had lunch, loaded up the pram and headed to the shops for groceries and then to the garden centre for plants for Milo’s ‘sensory garden’, which develops apace. I do not even know what a ‘sensory garden’ is so I am going to discontinue that term; it will henceforth be known as ‘Milo’s Urban Garden Project’. Nothing says urban childhood like astro-turf between the toes.

Predictably Milo was asleep reasonably promptly in the pram, remaining in this state for just over an hour. We arrived home about 1530hrs.

Kuepps had a work function and would not return until around 2130hrs so we watched some IT Crowd, took our time over the evening bath, read some books and Milo fell asleep without opposition around 1930hrs. I even managed an episode of Game of Thrones.