Milo thinks our cats are chasing him. They’re not.

The enjoyment derived from the relationship between Milo and our two cats, Suu Kyi and Huckleberry, is not evenly distributed. Milo thinks the three of them are an inseparable team of pals. Suu Kyi and Huckleberry seem to view Milo like a piece of dry food floating in their water bowl, growing larger by the day. All they need is patience and eventually the floater will be removed, and the water refreshed.

As the cats have climbed ever higher on the furniture, away from him, Milo has required less and less actual interaction to amuse himself. With fewer opportunities to put their paws in his mouth than there used to be Milo has developed other ways to enjoy Huck and Suu Kyi’s company.

The following is a common occurrence in our house at present: Milo will be playing quietly in the general vicinity of the cats, perhaps lobbing duplo down the stairs or bashing his xylophone with the hammer from his ‘Laugh and Learn Smart Stage Toolbox’. All of a sudden one of the cats will wrinkle a whisker in his direction or stretch a limb toward him in a feline way. Milo will spring to his feet, giggling in his lunatic way, and frantically run like a drunken zombie, quasi-upright with the assistance of his walker if it is within arm’s reach, or tumbling to the ground every three or four steps if he is unaided, such is his haste and level of excitement. Milo will not look back to confirm he is being pursued but will continue to laugh hysterically as he wobbles his way into the ‘secret room’ (upstairs bedroom) before plunging headlong on to the spare mattress, burying himself into the pile of cushions.

After a time Milo will slowly get his breathing under control, peel himself up off the mattress and clamber back to the doorway where he peers around to see if it is safe to re-emerge. The cats, of course, have not moved. Suu Kyi is invariably sleeping in precisely the same spot Milo left her, purring gently. Huck is usually licking himself, with disinterested half-closed eyes, also unmoved at the end of the sofa from where Milo fled.

It is hard to know whether Milo genuinely thinks the cats are advancing upon him, or whether he knows the truth but is choosing the fantasy because he just enjoys it so much. I have a sneaking suspicion it is the latter, and I hope it is. If so I believe it is an early onset manifestation of what we call in my family ‘the delusional gene’.

Essentially the ‘delusional gene’ allows one to interpret life as a miraculous series of events designed for your enjoyment, sometimes despite overwhelming evidence to the contrary. If applied in the right measure the gene lends itself to a positive disposition, cheerful outlook and can-do attitude. If the gene is available in over-supply it can lead to a delusion that borders on narcissism, or a lack of connection to legitimate day-to-day tribulations. In our family this is known as the ‘smarty pants gene’.

Thus far Milo’s outlook on life appears sparkling, with a healthy dose of spirited, forthright determination. The cat delusion appears to be a good sign. A boy who can take enjoyment from literally nothing must have a bright future indeed. 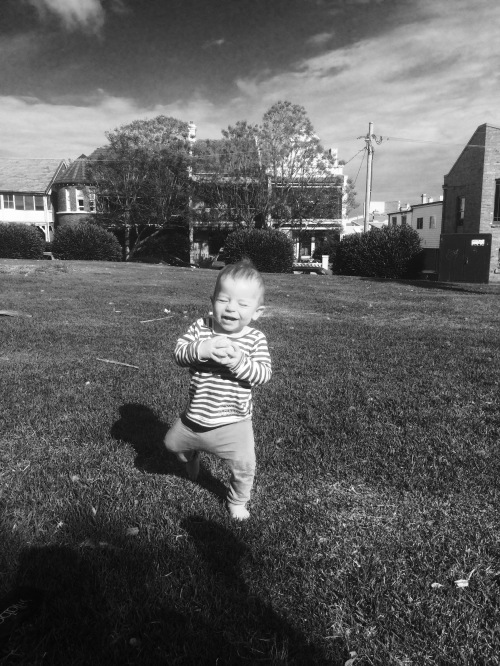